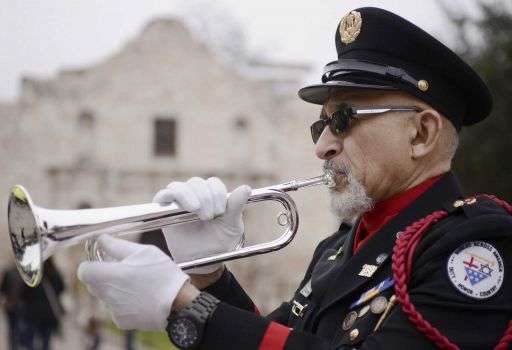 TDVA Supports The Keep The Spirit of ’45 Alive

On February 10, 2014 at 10 AM, local veterans and other military supporters welcomed the Keep The Spirit of ’45 Alive at Alamo Plaza. Several members of the Keep the Spirit of ’45 Alive nonprofit group made their way from their home in Virginia to a Spirit of ’45 leadership conference in California this weekend. The group seeks to preserve the spirit of one of the Greatest Generations and commemorate the end of World War II.

The Keep the Spirit of ’45 Alive group’s official bugler, Auston O’Neill, and his wife, Bonnie, were pleased to see San Antonians, which included Army veteran Joshua Primm, his wife, Lauren, Mary Virginia McCormick Pittman-Waller of the Wounded Warriors Initiative and the Texas Disabled Veterans Association. O’Neill stood in the cold, clad in a blue uniform with red epaulets and raised his silver bugle with white gloved hands and played the clear sound of “Taps” rang out through the Alamo Plaza bringing Alamo visitors to a standstill. O’Neill took up bugling after his father, a World War II veteran, died four years ago and a recording of taps was played at his funeral. Last year, O’Neill learned he had cancer and said with the time he has left, he wants to try to bring unity back to the United States. And his work has taken on a more personal urgency, because his son, Auston N. O’Neill, was recently deployed to Afghanistan.

Mary Virginia McCormick Pittman-Waller, who coordinated the nonprofit’s local visit, will be among the representatives finalizing plans to celebrate the 70th anniversary of the end of World War II next year. which was on Aug. 14, 1945, this was the day it was announced that Japan had surrendered to the Allies, effectively ending the war. Pittman-Waller, an advocate and founder of the Wounded Warriors Initiative, is the daughter of Dr. James Edward McCormick Pittman, a decorated medical officer that fought in the Battle of the Bulge and is buried in Utopia Texas.